OK, this may look like an old post, but a paragraph got left out.  Dang, and this
one is important!  I am going to re-post yesterdays post with the new one left out.
Because maybe someone will be reading for the first time.  Stay tuned!

However I did get one more live show in last Saturdaywhen I played for
Becky Lloyd Thomas' 60th birthday party.Becky is a long long time fan,
and friend, of my music. She goes way back to the 70’s! I performed in her
front yard for family and a few friends and a few of her neighbors even stopped by
or sat in their driveways and listened.The party concert was also streamed
to folks from the Fulshear House concert series (a wonderful house concert to play).
One of the extraordinary elements of the evening, and the party, were the
wild peacocks that roam the neighborhood. They were on the roof above me
as I sang and played, and one perched on top of my car.  They added to the
festivities and roamed freely everywhere throughout the hood. Definitely
one to remember! We came home with a handful of feathers gifted to me by
Becky!  Shopping (online) for a vase to display them!

Thanks Becky for inviting me to your party.  Also, you won the trophy for the
best "Rooster Crow"!
Another P.S., there will be no guests this Thursday at "The Duck", just live
streaming, so tune in on Facebook to the Duck site!

Thanks for inviting me to your party!


"Necessity is the mother of invention"

Well, looks like it will be necessary for me to find another way to
play and present my music in the near future, at least for a while longer.
The second wave is now in place and upon us in Texas, and because of it,
there are not many live gigs being offered or to be had these days.
SO—Whoa there, Gypsy Silver!! The masked folk singer will not ride for
now.  I have put Gypsy Silver back in the stable, and it looks like we will not
be riding anywhere too far anytime soon.

But—my “STREAMING FROM THE SANCTUARY” home shows
will continue Thursday evenings at 7pm.  So far, I have done three
shows from home and there will be more. So please mark your calendar and
tune in. I love the feedback from all of you.

You know the ‘House Concert’ phenomenon began over 20 years ago.
And probably 75% of our shows are house concerts. They are a great format for
singer songwriters. Music lovers open their homes and friends and neighbors
come out to hear music, have some food for a little social get together. It is a
wonderful way to play music for folks.  I find a lot of people prefer this
atmosphere to a club setting or having to drive into the city to hear music.
The size of an audience can vary from anywhere between 60-200.  Usually 60-100
but,we have played one for 200 (a very large home)  Like I said, I have played many enjoyable
intimate settings, but It was always in someone else’s home. Now I am doing house
concerts from my home to yours and for now, the concept is working.

HALLELUJAH!!!!!
JUST IN— NEWS FLASH!!!
Just found out yesterday—
This Thursday July 2. Instead of performing from home,
I will be streaming from the Mucky Duck stage (my home away from home) .
I believe there will be a small audience allowed for this event. I look forward to
real people in the audience instead of my Styrofoam cut out audience I’ve been
forced to create. I look forward to seeing you. If you cannot attend, please
go to their web site to watch and listen in. I believe the show starts at 7pm

See you soon!
Thanks and stay tuned.
Shake

Posted by Shake Russell Blog at 2:35 PM No comments:

Who was that masked man? 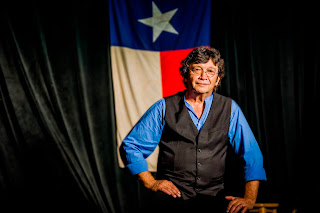 Why that was no ordinary masked man —
That was Shake Russell ’ the lone folk singer’.
It’s been pretty lonely since March 13th.
with only a handful of gigs since the lock down
and many of my musical cohorts are hunkered down,
I am saddling up and getting ready to ride.

In the past few weeks, since the powers that be
in Texas began allowing partial occupancy to businesses,
restaurants and clubs, I have played a few shows.
A private concert for two in their home for the Bishop's, two shows
at the Duck (both were streamed) one with 25% occupancy = 30 people.
I played one in Fredericksburg with 50% occupancy, with Wayne
Wilkerson on guitar and Mike Roberts on bass,  one solo at Anderson
Fair that was live streamed with 20 people in attendance.

A week ago we played an outdoor show at Bernhardt Winery
for about 300 + of folks. That show almost felt normal.

Slowly but surely, the phone is beginning to ring again and a few shows
are being booked here and there. I have a couple of private parties coming up,
and a solo show  at J P Hops House on Sat. July 11th www.jphopshouse.com,  as well as “Main Street Crossing “ in Tomball on Sunday July 12th (50% occupancy ). It’s an early Sunday show—music starts at 6:30pm.If you can’t make it out streaming is available for this concert also I believe.

Come on out to one of theses shows and help support all
the clubs and venues suffering economically from the shutdowns.

Later in July I will be performing with Michael Hearne and Mike Roberts at the
The Kessler Theater in Dallas on Friday, July 24th and the Heights Theater
in Houston on July 25th.  Mark your calendars!

LATE BREAKING NEWS!!!!!
Please don’t forget!!!!
I will also be continuing my “Live From the Sanctuary “
streaming concert series this Thursday evening, June 25th@ 7pm.
This will be my third show from home. I must admit, I am enjoying sitting on
my sofa singing  and playing songs for you, bringing back some old songs I
haven't played in a while!  Plus ‘Gypsy Silver’ is getting great gas mileage.
I love all of you tuning in and requesting songs and adding comments
as the evening progresses.  It’s fun from my end and I hope you enjoy the
informality of it all. Even the dogs barking in the background. I hope you will
tune in this week. Maybe I will do this sanctuary concert from our rooftop,
you know, like the Beatles did back in the day. Or maybe save it for another time!?!?

Anyway,  I will be doing a “soundcheck song” @ 5pm on Thursday
to remind you of the show at 7pm.   Please mark your calendar and
tune in.

Thanks everyone —and a reminder that YES, the masked man rides again,
so give us a call and book a show, a house concert or an event!!  We are ready to Travel Texas again!  Texas, New Mexico, Colorado and on!  Maybe even Wyoming!  If my buddy Kelly McGuire can do it, I believe I will try it also!

I look forward to hearing from you all, and seeing you all again soon.
Stay safe!
Stay tuned!
Peace,
Shake