We are home from our quick run up to Alamosa and Telluride in beautiful Southern Colorado. Wow, what a ride and a whirlwind turnaround shindig kind of a road trip!

I’ve unhitched the wagon and the ponies are watered and resting. I’ve had some shut eye. I feel a little stoved up but no worse for the wear.  Maybe a little weary from the past several days of traveling across Texas, New Mexico, and Colorado and playing a couple of shows along the way.  I’m feeling so blessed, my mind holds treasures of the places we’ve seen and I’m ready to recollect and share them.

Michael Hearne and I left Austin early Thursday morning last week and pulled into Alamosa, CO ten minutes before midnight (mountain time) right between Thursday night and Friday morning. We stepped out into the night and right away felt a reaffirming, cool welcoming breeze.  It sure felt good to be out of the Texas heat for a little while.  We were in Alamosa for a CD release concert to be held the next night at SOCIETY HALL.  Alamosa is the home of Don Richmond and Howling Dog Studio and Howling Dog Records. It’s where Michael and I recorded our new three CD project over the past winter.  We were sort of coming home to celebrate the release of the three projects/CD’s  with the good folks of Alamosa.  After all, this was the place  where it all happened, where the magic took place and where we laid it all down.

THE ALAMOSA SOCIETY HALL
Lisa Absmeier, Wayne McKinize, Pete Magee, Ruthie Foster and Don Richmond, thank you for hosting the evening and concert series.  The concert series is held in the beautifully restored former church which now serves the community as a live music concert hall.  We had a wonderful and very attentive turnout for the show.  Don Richmond, our friend and producer and multi instrumentalist on the new CD’s, joined us for the evening blending in his special touch to every song. Just as were hitting cruise control, well we kicked it up a gear. Don’s brother Jim, who is also as gifted musically as his brother, who happened to be in town,  joined in on mandolin and fiddle on a few tunes. There was indeed some serious jamming going on the stage.  Michael was smiling and everyone was grinning, and the congregational  all joined in!
We made some new fans that night with our music. I met a lot of new faces, and they said they enjoyed the songs. It was a great day.  I went to bed, thinking to myself… life is good!
All and all.

We stopped by the Monterrey cafe
before we left town for a quick breakfast.
I had Huevos Rancheros con hot green chili gravy, homemade corn tortillas, and a second cup of that cactus jack. We paid the bill and tipped our smiling waitress and sang adios amiga. We headed west towards Durango on highway 160.
and drove up through the mountains over the pass that lay between. and  on down into and through Pagosa Springs, until we reached  Durango and continued on to Mancos then turned right onto 184 and up to  Dolores. Then from there on up 145. to Telluride.  What lay in between for the next 60 miles was simply breath taking, jaw dropping, mind blowing vistas, valleys, mesas and sprawling canyons, panoramic surrounding mountain peaks, roaring rivers and rushing mountain streams.  Towering  giant evergreens, some of the biggest I’ve ever seen! This was Jeremiah Johnson … Big bear country. Michael was busy snapping pics (but the pictures weren’t doing it justice) and wishing he’d brought a fishing pole or his fly rod. I was keeping my eye on the narrow curvy road ahead and watching for Elk.

We reached our destination, the Telluride Mountain Village,  and turned into a giant ski resort,  hotels and golf course area. We arrived with time to spare to check in and chill before sound check.
The Sunset Concert Series is produced by our friend Steve Stagner from Austin,Texas
and hosted by The Madeline Hotel.

Within the confines of this massive hotel complex were several common green areas
where guests could gather to play games with their children, or socialize before dinner,
even watch movies, or to hear free concerts. We were playing the Sunset Concert at 5:30 till 7:30 pm. The multi floored hotel surrounded the courtyard common green area and made it possible for some folks to stay in their rooms and sit out on their terraces to watch and listen to the music.

Just as we finished our sound check at 5pm, the rain began. Every one scattered and ran for cover. With the forecast for the evening looking like more showers, the decision was made to move it all out of the common green area into and under a little covered corridor/tunnel  of restaurants.  It had a bit of a casual, side walk cafe, European villa feel and design or vibe. For sure it was not our average setting to play a concert, but different, and that’s what keeps it interesting.

Much to our delight and surprise there was a large contingency of Texans in Telluride at this time of year, “ getting out of the heat”. So word got around the hotel and resort that we were playing and consequently we had a strong showing from Texas represented, requesting songs and cheering us along. Come rain or come shine the show did go on! Everyone had a good time!  There was even a little dancing going on the green after the rain stopped and the sun came out.  Thanks Steve and Lisa for inviting us ad taking such great care of us. We’ll see you back in Austin at our concert at The Rock Room on August 30th. Everyone mark your calendars for that treat of a venue with Michael and I playing new songs and old!

Sunday, we’re packed up bright and early and hit the trail back down through the mountains,
winding along the river, through Dolores, back to highway 160 and then on south on 550 from Durango, all the way to Albuquerque, NM.The stretch of highway rolled through the most magnificent array of colored canyons and wide ranges and mesas.  We were in  definitely in Indian country.   I kept expecting smoke signals to appear from behind and over one of the hills
or to see a wagon train circled in the distance, or a herd of buffalo stampeding across the plains.
Even Michael, who lived in New Mexico for over thirty years, had never seen this part of the state.
He was amazed at what we were seeing. This would  be a drive to make and time for the sunset hour.  The colors will astound you.

Well we took a vote  and it was unanimous ….we had just one last chance for green chili before we left New Mexico, so in Albuquerque we had lunch at a famous diner called The Owl Cafe.
Look it up!  Check it out if you’re passing through on I-40 east heading towards Santa Rosa. Michael had eaten there before so he suggested it.  Good call Elvis! It’s a cool vintage, one of a kind, legendary place, with an individual juke box at each table. Remember those?  PLUS… “the best double green chili hamburger in the world!” according to Michael. How about a piece of that pie to go and a chocolate shake! I almost bought a tee shirt.

So we’re high tailing it,  heading east across New Mexico, to Fort Sumner, “where they shot the heck out of Billy the Kid” and buried him right off the side of the highway.  It is so convenient for everyone to stop and have a look. I almost bought another tee shirt!  Then comes Clovis, N.M.,  home of Norman Petty and his famous studio where Buddy Holly, Roy Orbison, and Waylon Jennings recorded their early hits. Then a  ‘SLOW DOWN LOW DOWN’…and I  saw a hornets nests of ‘black and whites ‘ hidden behind bill boards in some small West Texas town.  It was like they were hunting fish in a barrel. Better watch your speed and set your cruise control. Then it’s onto Sweet Water, into Lubbock on down the pike to Austin.  Michael jumped off the stage coach somewhere outside of Austin, I rested for a spell, heated up some beans, had a cup of cowboy coffee, then broke camp before daylight. I continued on down to Houston.
Yes, It’s always good to be back home! Time to rest a bit and catch up on things.

This Saturday we will be in Alvin, Texas at the beautiful home of Pam and Greg Leitner for our annual “Relay For Life” concert…. so come on out.   For more info on tickets  please contact Pam at  281-393-1672 https://leitner-house-concerts.ticketbud.com/michael...  for tickets on line.  Having trouble with that link, so best to give her a call.  I think there are only 10 seats left!  Hope to see you there. 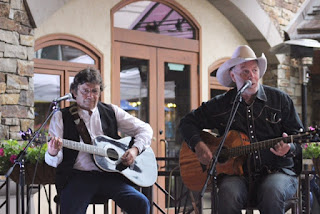 Snapshot taken by Lisa Stagner up in Telluride!  Thanks Lisa.   Shake
Posted by Shake Russell Blog at 9:00 AM